Freeland announces new budget…who will benefit from the bounce?

With billions more in fiscal spending coming up, Minister Freeland is far from stopping the Liberal government’s record-setting stimulus spending. In the wake of the COVID-19 virus and crisis, they argue, the spending is needed to keep the economy afloat in the short term and help it recover in the long term. But which companies will benefit most from the new spending, and taxation, plan? 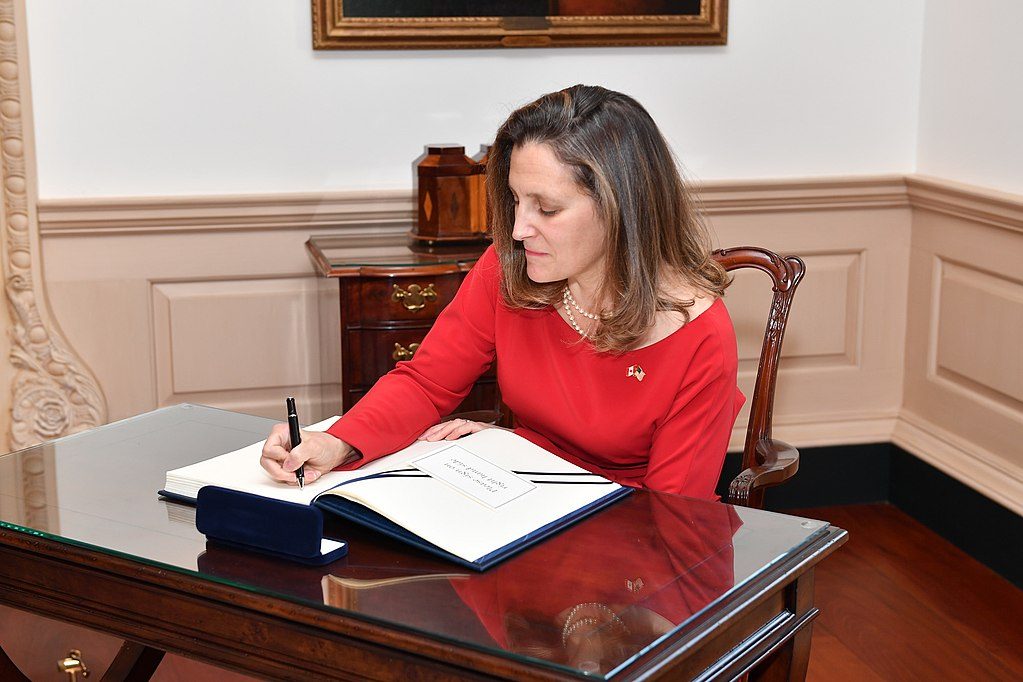 On Monday, Finance Minister Chrystia Freeland unveiled the Federal government’s newest ‘mini-budget’ spending package. With $51.7 billion added to the pot of economic stimulus, and another $70-100 billion predicted (if not in detail), the announcement marks an addition to the government’s already extensive recipe for recovery. But how will the money be allocated, and what hints can we draw from it to determine who will benefit?

While there was much hubbub over their announcement this Monday, the addition to the budget should hardly come as a surprise. It represents a small, if significant, increase in the federal spending post COVID-19. Just over 50 billion on top of an already hefty spending program, one which they also announced might put the deficit up to 50% of GDP, an unprecedented high. It also provided vague, if important, indications of where the extra stimulus money for next year will be going.

And where is this money going, you might ask? Like most of the 260 billion that will have been spent over the totality of 2020 on relief measures for Covid-19, the current plan is designed to prop up the economy, and the livelihoods of Canadians. But it is not designed to do much more, just yet, than keep the existing lifelines open.

While the macroeconomics of their choice are interesting, and important, they have been covered extensively. What about tax hikes to pay for the additional spending?

Spending will outstrip new Freeland taxes, but they should not be ignored

In order to help soften the fiscal cushion of Canada’s generous fiscal spending plan, Minister Freeland has announced, and predicted, some taxation increases. The predicted revenue increases for the federal government, however, remain far below estimated spending. Despite their small size relative to the budget, their impact on certain industries and individuals could be considerable.

For one thing, online tech giants may see their Canadian operations squeezed by new obligations to pay GST and HST. While it is unclear how much of these expenses will be passed on to the consumers they represent millions, if not billions of additional revenue for the federal government.

Another measure targets the wealthiest, those benefiting from stock options on their compensation scheme, who would be taxed now far more heavily, and at a lower bar, than before. While there are some exceptions (more on this later) the Canadian government already predicts a heftier impact on wealthy men, though to what extent this might hurt companies remains to be seen.

How can savvy investors take into account these new budget decisions?

Although most of the Chrystia Freeland’’s proposed solutions are general and apply to Canadians across different sectors (like extending the wage or rent subsidies), some sectors will be more affected than others. While the immediate fallout of these decisions will likely take some time to settle, there are a few underlying trends we can already start to pick up on. Trends that investors should take into consideration.

Airports, not airlines, will be immediate winners in the current spending

While the air sector, in general, has been feeling the Covid-19 crisis particularly harshly, Minister Freeland seemed unwilling to announce a big bail-out or more extensive safety nets just yet for Air Canada or other airlines.

Instead, they have a piecemeal set of smaller measures that are aimed specifically at airports. Assistance with transfer payments, waiving or deferring rent payments for airports of different sizes, and new funding for airport authorities all adds up considerably. Orders of magnitude more than the 180 million budgeted for rail. While we might eventually see bailouts to help the big carriers, the companies which depend on the airports to function will be getting a breath of fresh air now. Air Canada continues to sweat billions.

Startups, not big tech, are likely to have the most unfettered growth

A key feature of the new announcements was their taxation scheme, which clearly favors small start-ups and local companies over big tech giants. While some of these huge tech players have been doing remarkably well during the pandemic, any outside Canada will likely see their Canadian revenues fall as the GST and HST start to kick in.

Investors might also worry that Canada’s negotiations with big tech giants like Airbnb or Netflix could set the stage for other countries where these services are not taxed, or even for new taxes on Canadian internet rising stars like Shopify. Not only that, but the stock option taxes could cut into domestic Canadian firms’ ability to attract high-powered executives or cut into their profits when they do.

But there is an exception to this last, up and coming Canadian start-ups will be exempt from the extra taxes from stock compensation. This means that they will be even more competitive on the market, and more attractive at the early stages to risk-taking entrepreneurial talent. This makes startups, especially in the tech sector, an appealing buy for investors looking to move their capital out of the unsteady giants.

Tourism and the Arts: too soon to take risks

While Freeland’s budget also offers specific financial assistance to the tourism sector across Canada’s embattled provinces, it would be hard to pin down a specific segment to invest in. Especially as their long-term success depends more on peoples returning confidence or the timing of the vaccine.

Similarly, the fine arts see a non-insignificant reply to their pleas’ for assistance. Unfortunately, with Netflix likely to back out of certain Canadian deals (they were originally negotiating for a deal with the Federal Government to return a share of their profits as investments in local media) it is unlikely to be enough to make a significant difference for investment opportunities. Thus both sectors, while winners in the deal, are unlikely to deliver wins for investors in the near future, and jumping in would likely be too soon.

PrevPrevious postTrade Agreement between Canada and the United Kingdom signed ahead of Brexit
Next postBut how much vaccine did Canada actually order?!Next