After a year of virtual conferences, will in-person events make a comeback?

For the last year, all we’ve heard about is how virtual conferences and events are “the new normal.” But, if we step back and survey the landscape, signs that in-person events will make a comeback are emerging. Increasingly, we’re realizing that virtual meetings are a poor substitute for real-life networking. A growing number of events are now enthusiastically committing to venued events. 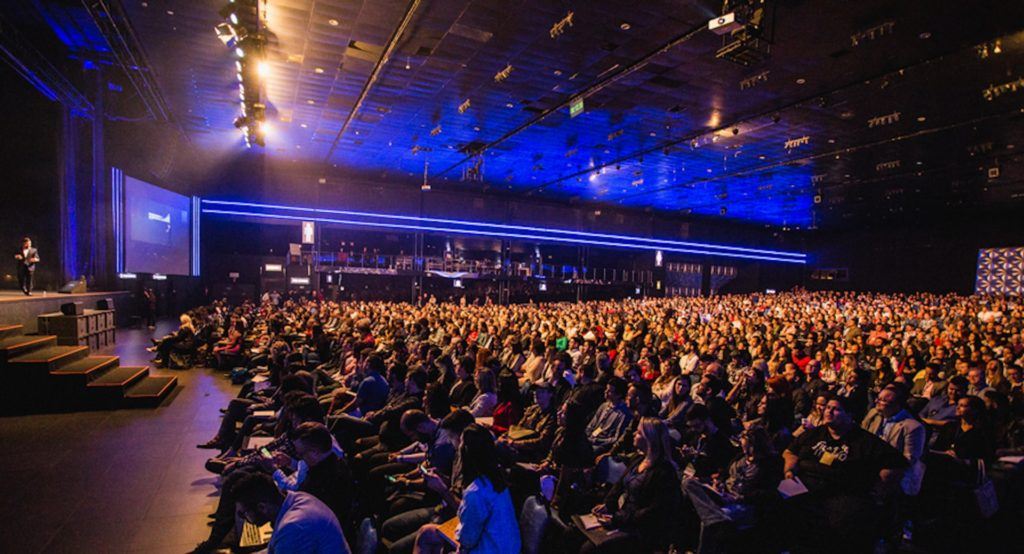 When COVID-19 first transitioned from being a distant threat to unwelcome arrival, virtual conferences seemingly took off overnight. Even when Trump was still towing the ‘Coronavirus is the Democrats’ new hoax’ line, conference organizers were pulling the plug on in-person events left, right, and center.

Unsurprisingly, tech companies were amongst the first to start pulling the trigger. Already well adapted to the online world, it didn’t take long for Facebook, Google, and then Microsoft to announce that their annual developer conferences would transition to being entirely virtual. Much of the world followed suit shortly after.

Now, a little over a year later, and with a vaccination rollout in full-flight, it still seems that confidence in in-person events is low. Even startup events like TechCrunch Disrupt—where participants ostensibly benefit from the ability to shake hands in person—are being hosted as virtual events, despite being held at the tail end of this year.

This may seem like the obvious thing to do at this point. But others are not so convinced that abandoning in-person events is the right move. After all, the rollout of vaccines is accelerating as manufacturing capacity is brought online. It is well within the realm of possibility that we’ll hit a point where the spread of the virus sharply decelerates within the coming months.

For some, it’s time to look past virtual conferences

Even if we fail to get a handle on COVID-19 this year, the worst that can happen for event organizers is that an in-person event is canceled. But we’ve already been there and done that. Cancellations or forced transitions to online will only be smoother given the experience gained.

Fortunately, for those amongst us waiting in eager anticipation of our first real-life event since who-knows-when, there are signs that this may well be the year. Emboldened by the ever-brightening light at the end of the tunnel, even some in the online-adapted tech world are taking calculated bets and announcing firm dates in ‘firm’ venues for their events this year.

Curiously enough, a lot of this activity is happening in European countries like Germany, France, and Spain. All countries that have been—and still are—imposing some of the more enduring lockdowns and distancing measures. Just last Friday, in the face of accelerating infection rates, German chancellor Angela Merkel appealed to the nation’s parliament to broaden her government’s powers to impose tough lockdown measures. For its part, France is also in the midst of a semi-lockdown, with residents subject to a strict 10km travel radius and an evening curfew.

But we can still find positive sentiment simmering beneath the surface, even in the midst of enduring hardship. During his televised address to the nation, French President Emanuel Macron exuded confidence that his nation’s vaccination program was on track to vaccinate the most at-risk populations within months, and a large percentage of everyone else by the end of the summer. And this is from a country lagging behind many other developed nations in its vaccination program.

Of course, presidential bravado doesn’t necessarily translate into reality. Many event organizers are overtly cognizant of the enduring risk to in-person conferences that COVID-19 poses. Instead of burying their heads in the sand, they openly acknowledge the risk. On the ticketing page for one of France’s international startup events, the Startup Supercup, organizers have included a brightly colored notice that the event may be canceled (while assuring ticket purchasers that they will get full refunds if this is the case).

Others seem to be taking a more balanced approach, and appear to be hedging their bets. The international Gamescon in Cologne, for example, has adopted a ‘hybrid’ approach for this year’s event. While it’s impossible to tell if this was to control in-person crowd numbers, provide a built-in escape hatch, or (more cynically) just to be in a position to sell an unlimited quantity of tickets, the organizers did hit on one thing many of us can agree within its press release for the event: “Community and industry desire the on-site experience.”

The universality of this sentiment is, of course, questionable. Google, IBM, Nokia, Sony, Oracle, and Ericsson have all announced they won’t be attending this year’s in-person IFA. But there is undoubtedly more than a handful of people who feel virtual conferences have their limits. When so many conference-goers are there for the networking opportunities as much as the actual content, it’s hard to claim that a virtual event is anything but a watered-down replacement. Zoom and other video conferencing are far from perfect for human interaction and, at least for the foreseeable future, Virtual Reality will remain somewhat of a joke in this sphere.

As we get over the novelty of doing stuff online, we’re only going to see all the “new normal” dialogue replaced with “when will it end?” As innately social creatures attuned to the subtleties of body language and proximity, the desire for authentic human connection will leave us increasingly frustrated with online tools.

This resurgence of desire for authentic human connection is perhaps why a handful of organizers like the Startup Supercup have committed to an all-or-nothing approach. When the entire purpose of startup events like Disrupt and the Startup Supercup is, for a majority of attendees, to network and make deals, a virtual conference just doesn’t cut it. Yes, Disrupt’s reputation will, for this year at least, thrive as a virtual event, but this will be purely on the back of reputation, not optimality.

Ultimately, while we may be stuck with virtual conferences for some time now, the return of the in-person conference is on the horizon. The fact that events like the Startup Supercup are now emphasizing the relationship-building nature of their in-person events indicates that the desire for authentic, in-person networking is already there. Now we can only sit back and hope that the momentum building for a return to in-person conferences continues to build.