John McAfee, a man who made his fame on the back of antivirus software, is now implicated in an SEC indictment brought before the Manhattan Federal Court on cryptocurrency-related charges. Along with Elon Musk’s Dogecoin tweets, this is just the latest event in an ongoing series of scandals that the emerging currencies have seen. Fortunately, there are some safe places for crypto enthusiasts. 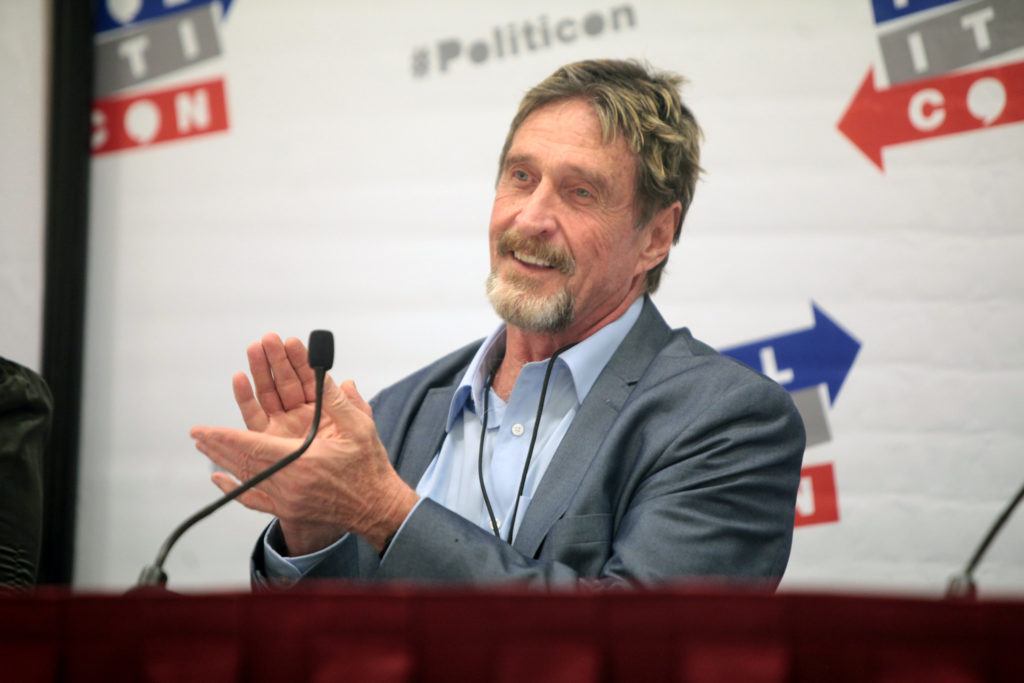 If you don’t know who John McAfee is, look long and hard at his last name. Chances are, if you’ve owned a Windows PC at some point in your life, you will also have been a user of antivirus products bearing his name. What might not be quite so obvious, however, is that any real relationship between him and the software bearing his name ended in 1994. That all ended two years after the company incorporated when he sold his stake and fled for greener pastures.

Following on from his exit from the antivirus business, McAfee found bigger and better things to fill his time with. After spending the rest of the nineties building the first instant messaging software for Windows, he moved on to writing in the year 2000 and released Into the Heart of Truth: The Spirit of Relational Yoga. In more recent times, he’s taken a shot and becoming the Libertarian Party’s presidential candidate in 2016 and 2020. And he’s also taken to dabbling in cryptocurrencies… although it now seems the SEC has arrived at the conclusion that he did more than just dabble.

Yes, McAfee has also been indicted recently for tax evasion. After taunting authorities for years, an indictment charging McAffe with “tax evasion and willful failure to file tax returns” was unsealed in early October of last year. The allegations concern John’s income from “promoting cryptocurrencies, consulting work, speaking engagements, and selling the rights to his life story,” and his evasion of taxation by “directing his income to be paid into bank accounts and cryptocurrency exchange accounts in the names of nominees… and concealing assets, including real property, a vehicle, and a yacht, in the names of others.”

But, despite the noteworthy mentions of crypto in the laundry list of charges filed against him, this is a separate matter from the more recent SEC allegations. This time around, he’s implicated with a coconspirator—his personal bodyguard Jimmy Gale Watson Jr—and is suspected of manipulating cryptocurrency prices for personal gain: old school pump and dump.

The charges, filed in the Manhattan Federal Court, all took place over the course of approximately a year, starting in December 2017. According to the filing, McAfee and his partner in crime allegedly committed two different categories of securities fraud. Of course, McAfee vehemently denies the allegations.

In the first, a classic pump and dump (more correctly known as scalping) is said to have been executed. Apparently, McAfee and co would purchase large sums of crypto assets at bargain-basement prices, before promoting them through McAfee’s Twitter account to his large fanbase. When his followers took the bait and triggered an apparent bull run on the crypto asset in question, McAfee and his friends sold their holdings, leaving the rest of the poor suckers holding the bag as the prices fell back down again. Aside from the use of Twitter and Cryptos in place of telephones and stocks, there was really no reason why this couldn’t be a Wolf of Wall Street-cum-Snake of Silk Road tale.

The second and perhaps slightly less premeditated charge is that of concealing that he received compensation for promoting certain Initial Coin Offerings (ICOs) throughout this period. Further, it is also alleged that McAfee and Watson “caused another McAfee Team member to engage in banking transactions to launder proceeds of the fraudulent ICO touting scheme.” What exactly is meant by “caused” is something we’re unable to divine here, but it seems safe to assume it means that the transactions were not the result of a chain of events set off by some butterfly flapping its wings in the Amazon.

But wait, there’s more… who remembers the Bitfi wallet scandal?

During the time the SEC allegations span, John was also heavily involved in promoting a cryptocurrency wallet going by the name of Bitfi. This in and of itself was nothing remarkable—it was the claims that the wallet was “unhackable” that really set off somewhat of a firestorm on social media. Technically, nothing is unhackable (as is empirically proven in the proceeding comic), so a good chunk of the global security community paid a whole lot of attention to this.

The following publicity fire spread quickly, and the flames were only further fanned as John and the company behind the device attempted to deny that successful attacks demonstrated against the device constituted “hacks.” There were also a few other embarrassing tidbits in there. Minor details like the outdated Android phone the hardware was based on (despite the company claiming it wasn’t a phone) and the discovery of a malware suite called Adups FOTA. That last little easter egg could phone home to China every 72 hours for no other apparent purpose than to transmit the user’s sensitive data.

The result of this was a Twitter storm that climaxed with Bitfi threatening security researchers with an ominous-looking “did you guys even bother to look into who you picked a fight with & the resources these people have?” To this, the research community responded by granting Bitfi a “Pwnie” award (a sort of wooden spoon tradition at a large security conference that recognizes the biggest failures within the infosec industry), and another subsequent attack including a “Gassing RAMen” step in the sequence of steps followed to extract secret keys from the device’s RAM (the company had earlier claimed that the device’s secret keys were never stored in RAM).

With Musk’s recent tweets, Doge(y) dealings in crypto seem to be the latest celebrity trend

Almost as if he wanted to foreshadow the SEC filings against McAfee and Watson, Elon Musk has also been taking to Twitter lately and hyping up certain cryptocurrencies.

Yes, his stirring of the Dogecoin pot was more likely driven by his perpetual desire to troll the masses than by the sort of malice that piques the interests of the SEC. However, that doesn’t mean the resulting Dogecoin Bullrun wasn’t revealing of something fundamentally wrong with crypto. Particularly during these formative years.

The fact that the tweets of single (admittedly influential) actors were able to move currencies in more significant ways than even some penny stocks traded on OTC markets reveals just how volatile these assets are. Even Bitcoin with its relatively massive “market cap” has still seen wild swings in value in recent months on nothing but the news of a single actor and a single company. Even George Soros probably doesn’t have this sort of power over more traditional currencies, and he’s got a hell of a lot more credibility than Musk or McAfee when it comes to swapping currencies around.

Moral of the story: avoid the charlatans and trolls—get a LODE of this honest money alternative

While it’s hard to say with any certainty whether the old saying “what goes up must come down” will apply this time around for Bitcoin, let’s not forget what happened in the wake of the last bubble. Maybe one day in the distant future, if Bitcoin ever gets the liquidity and legitimacy to act as a serious currency, it may be a truly viable alternative for folks willing to hold onto fiat currencies. And then maybe… just maybe… a few others might join the big leagues as well… if the scammers don’t ruin it first, that is…

However, until then, it’s really hard to recommend any cryptocurrency asset other than those that are backed by real assets. And, apart from the gold- and silver-backed cryptocurrency coins from LODE (AUX and AGX, respectively), there aren’t that many options around. It also happens to be one of the few cryptocurrencies with its own cryptocurrency wallet application, called LODEpay. This makes it mindlessly convenient to actually spend the coins held in the wallet which, if you remember that they’re gold- and silver-backed, is a modern solution to bringing back an age-old method of exchange that remains relatively free from the manipulations of speculators and hypemongerers—gold and silver.